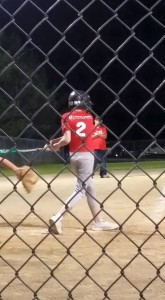 My youngest son swinging the bat last night! Didn’t connect this time but did make it to base the time before and made it home. He loves to steal bases! He is gutsy! 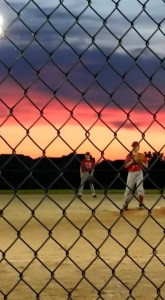 The second oldest son playing shortstop! He had a lot of fun playing last night. He didn’t make it on base but I don’t doubt he will get there. First game jitters!

I love baseball! I played when I was small clear up to adulthood. I never really cared for co-ed so pretty much stopped when our hometown went to co-ed instead of men and women’s leagues. I love that all four of my kids loved playing the sport. I think these two boys will continue playing as long as they can. The second oldest son is the one who really loves the sport. I bet if he could play upper leagues he would as an adult.

I have yet to take them to a major game. I need to get that accomplished! I would love to go. We missed getting signed up last year and they wouldn’t let us add on. Boy was it a boring summer. I kept my eye out this year!

This year their ages allow them to be on the same team. They were not happy but I definitely am. I don’t have hubby here to help because of his job so glad only one team games and practices to keep track of. We do have a busy schedule!

We are off to another game tonight! Yay!!!

Pretty good for getting rained out of their practices! 😉

5 thoughts on “Swing That Bat!”