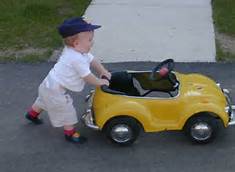 I decided to head back home from my daughter’s on Monday and ended up with a broken car on the interstate. I can be thankful I was able to coast to the side and for cellphones for calling my hubby. I must be listening to hubby when he talks to people about cars because I was able to figure out it is my fuel pump. He has done a couple tests and so far it is pointing to that. He has another one to do to make sure it isn’t something else. My luck, it will be a bigger problem. The car has been a good one, but it has had electrical issues. I hope it is nothing bigger. He did try the fuse and no such luck for an easy fix, they were fine. Sigh. I am thankful also for having the son living here because now we can share his car.

It did create a few funny odd happenings though.

Hubby came to pick me up, we grabbed everything out of the car just in case something would happen to the car before we got back the next morning to pick it up. It happened after hours and nothing was open to rent a car pulling thingy. We missed grabbing my bag that had my comb in it and my toothbrush.

The bag was grey and it was dark, in disguise.

I had no way of combing my hair after showering that night. All the males in the family have no hair or really short hair so they don’t comb their hair. My son Jessup was really sweet trying to comb my hair with his fingers. I take it he missed me being gone. 🙂 I must say, I had really fluffy hair not being able to comb it. LOL. I did go to the store the next morning and of course forgot buying a comb. It was even on my list. Shaking my head.

Luckily, my daughter has an OCD issue with toothbrushes, she had bought several and left here, so I was able to have a new toothbrush after showering. I needed a new one anyway. Now, I must replenish her stash.

While I was showering, I was in deep thought about my car, I put body wash on my hair. I kept thinking why isn’t this lathering up? I turned around and realized I had grabbed my body wash. Duh. Maybe that is why my hair was fluffy. We could be on to something there. 🙂

The next morning we were able to rent a U-Haul car dolly pully thingy. We went to pick up the car which was about 30 minutes from us. Yeah, I was that close to being home.

It rained all morning.

Luckily, it stopped long enough for us to push the car up onto the dolly. I got to do the steering. It was a bit of fun, though I kept thinking I would not hit the brake in time and go flying into my hubby’s pickup. Of course, it has those big tire dips so that wasn’t going to happen. You know, a writer dreams up the worse and funny scenes possible.

We were able to get it back to our duplex. The next fun task was to get it into the garage. We have a pretty steep drive way. Hubby pulled up into a vacant driveway a few duplexes North of us. At first, I was helping the oldest son to try to rock it off the dolly but I am a weakling and couldn’t get it. Once again, I am put into the steering task. I could just picture myself flying backwards off it and crashing into an oncoming car.

I braked again when I was supposed to, then hubby switched and became the steering person. The oldest son got him pushed out into the street and they were able to turn the car to head down the little hill to our drive.

It was a funny sight to watch.

Son pushing while hubby trying to turn into the drive and up the drive. They almost made it, but not enough He-Man. Poor son got his workout.

They did get it in the garage after some major pushing. Unfortunately, the son ended up dizzy afterwards because of his last month’s head injury. He is ok just over did it. I know this weakling wouldn’t have been able to push it. I better get myself back to the YMCA. 🙂

All ends well. I am glad it wasn’t a worse situation. I am hoping for a quick and easy fix. 🙂