My stats says this is the 100th post so it better not make a liar out of me. 🙂

My grandpa always said I was “windy” growing up. I never thought when I began this blog that I would get to this point in two years time. I congratulate those that can blog several times a week. I suppose in time I will get to that point, maybe.

My problem is I think of something fun to blog about, discuss it with my “thoughts” and then I forget what it was when I finally sit down to write it. I have a small notebook but forget to jot the ideas down. I guess I should start putting scratch paper everywhere. 🙂

I could place my post-it notes around the house. 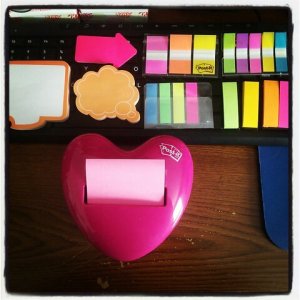 I can usually recall a memory from a few notes so the small ones would be plenty big. I can write pretty small.

Actually, that jogs my memory from school days.

I can remember a few of us girls going through a phase of seeing how tiny we could write. It drove the teachers nuts! The writing was nice and neat, so I don’t understand why they frowned handing the paper back.

Of course, now that I am that age, I do see the problem. I imagine after grading tons of papers the last thing they wanted to see was something so small they needed a magnifying glass to read it. 🙂 It sure was fun though.

I almost messed up blogging about my 100th post. I did those two reblogs, about did another, when a little light bulb went off in my head and I remembered I was about to hit the 100th!

Phew, that was close.

I meant for the 100th to be my first book cover reveal, but I am still working on it. I am also working on my edits. I am over halfway done. When I edit, I edit one chapter at a time. I actually end up editing it close to four times if not more.

I do my crossing out in red,

talk to myself about how ridiculous that sounds, grab a Pepsi, watch some detective movie,

daydream the scene with me in it. (LOL), go on to next chapter.

I’m hoping to be ready to hit that publish button by the end of the month. Hopefully, the movie watching won’t delay that. 🙂

I want to start the next book during Camp NaNoWriMo in April. The books are part of what will be a trilogy. I rocked it last year so I have a good vibe about this year!

I like writing in the warmer months better than the colder months.  The last two years, November through February, I have not been inspired to write my book or edit it. I call it my vacation time. 🙂 Sounds good to me.

I have been struggling with the question of, will anyone like my book? I think that has made me slow down on editing the most. I hope people will like it, but at the same time, I am writing it for me first. I have wanted to write a book since I was in junior high.

I am thankful for the technology of e-books. I will complete one dream because of it. 🙂

When was the first time you wanted to publish a book? 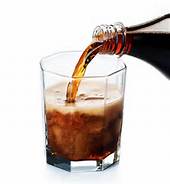 Ahh! What a disgusting drink. Aw the taste of water… Have you guys ever liked water so much. Well the real question is do you think Spring Valley should sell pop at our school, I don’t think so at least. I don’t think so because if you do the teachers will have to tell the kids to be quiet more because they’re more hyper. ( I already talk a lot! Lol) Also if you let kids buy pop they’re gonna go home and their parents are gonna complain sense they just drank 3-6 pops which is surprising. It also isn’t that healthy for you, your parents are going to have to take you to the dentist and it’s gonna add up and cost a lot after a while. Plus soon or later you would have lost all of your teeth.

The teachers already get mad if you talk a lot. You’d lose your recess of course… If you talk too much what would be the point of buying it anyways. Plus if you hyper in the mornings you shouldn’t even get it cause you already have all your energy. You shouldn’t buy this for multiple reasons. It’ll give some of your teachers stress.

Also your teacher’s class would have children buying 3-6 pops a week or even a day! You would be getting a lot of complaint mail and you would have problems. The kid’s parents would be sending you their child’s dentist’s bills. You would be like I don’t have the money! There are just that many kids that would drink that much.

That’s my reason why you shouldn’t buy pops for school. True it would give kids the energy but they would be bouncing around like BOING BOING. I would like a pop every once and a while. But if you did limit or something. Plus some of your students would get annoyed by other crazy kids and they would disobey some of the rules.

I am happy to see he knows pop is bad for you. 🙂 He sees me drink one almost everyday. I definitely don’t allow them to have pop all the time. I encourage water and they do see me drink more water than pop. I am glad he understands.

I am finding his essays to be entertaining this year. I like seeing his thoughts. I think the Common Core is not all bad. It is just a change. If it encourages more writing, well heck, I am all for it. 🙂 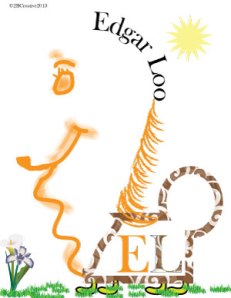 Today was my day for tuning into CreativeLive for the free Illustrator lesson. I did learn a lot and refreshed my mind from years ago when I first took the course. As my mind began to wonder and after sitting on my butt for several hours, I began to doodle in Illustrator.

My lovely creature formed as the teacher showed tips and tricks. I named him Edgar Loo, have no idea why, it just popped into my head. I’m thinking he might become my new muse for writing. 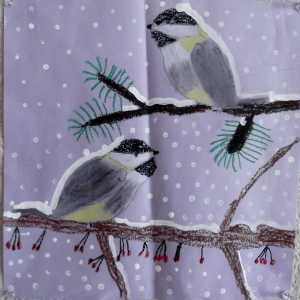 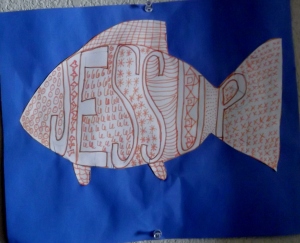 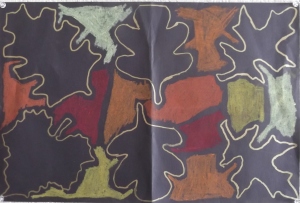 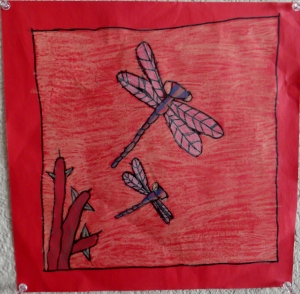 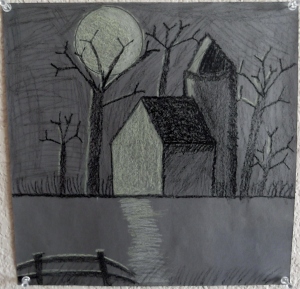 My two sons that are in fourth and fifth grade created these art projects. I was delighted to see how much they have improved since last year. It could be that they have a more involved art teacher this year, rather than someone who just gave them colored pencils and a sheet that already had a shape. It goes to show what can transpire when a teacher chooses to teach a young person about the different media’s and drawing objects instead of coloring in objects.

I am having my husband make some frames for them. I think decorating with my family’s artwork gives them a boost to their self esteem and it is better than keeping them in a box collecting dust. I have to admit I am one of those that can’t seem to throw out any of their stuff. I am also going to use some of their artwork for scrapbooking pages so I can recycle them. I guess you could say I am sort of a hoarder of kids artwork. 🙂 Luckily, they do not make that many art pieces or we would have to buy a bigger house.